As I am sitting around the table for Thanksgiving Dinner, my grandma is telling me about her time as a stenographer. She told me about shorthand—where one can write lines and dashes in regards to the sounds being emitted in conversation. It made for scarily fast documentation and was ideal for recording conversations. My grandma had been extremely gifted in this regard, as she could write in shorthand faster than people could talk. She told me stories of how her teachers in high school would speak as quickly as possible, switching the tone and pitch of their voices in attempts to throw her off. But my grandma would recite back to them exactly what was said. It was a phenomenal skill. She told me about Thanksgiving Dinners when she was kid. She would sit back with her steno pad and record her parents and relative speaking around the table. When they were done talking, she would recite the entire conversation back to them. I was engrossed. I had her write my name in shorthand. A six-character name—Justin—was reduced to two quick flicks of the wrist, resulting in something that looked like an italicized ‘h’. It was genius. 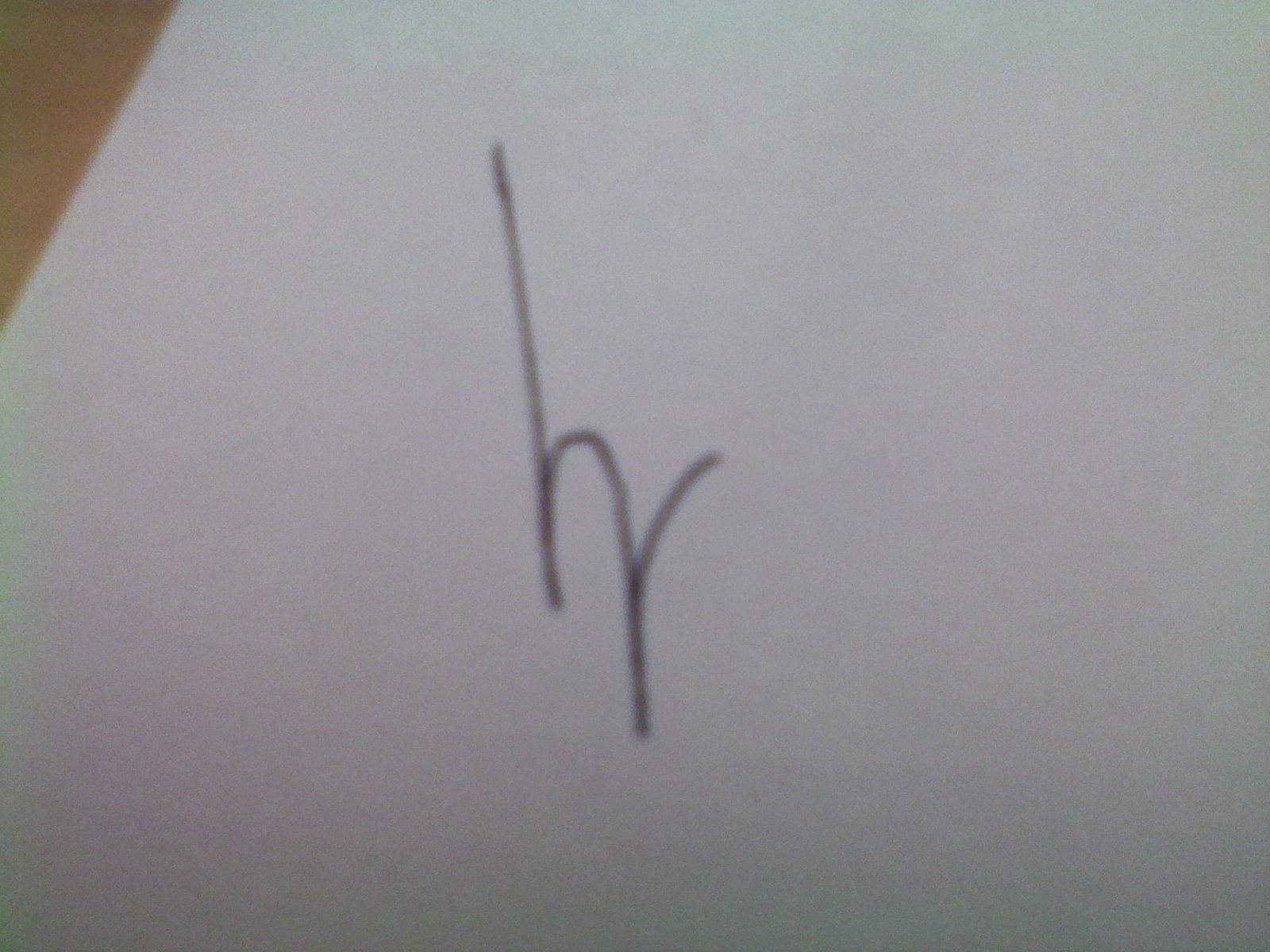 As I got to thinking about shorthand, I started to wonder why it had died. Quick recording was definitely a highly-regarded need in the modern age—probably more so than ever. We want minimalistic accuracy. Shorter. Sweeter. Simpler. Communication is key to any aspect of life, and when it is elegantly frugal, it is most effective and beautiful. Why, then, did shorthand largely disappear? Or, more accurately, why was it never adopted for public use?
In the rise of social media and the digital transfer of information, most communication is done through text. Whether it be emailing, messaging, texting, tweeting, or whatever, a reliance on characters has become nearly unavoidable. As a result, people are writing much more. Not with the hands, as cursory handwriting has been eliminated from most education systems and printing has declined in neat/careful+ness, but through typing. People can type as fast as my grandma could write shorthand. On the surface, the move to typing would be common sense, as the text could be CTRL+C & CTRL+V <copy and pasted> infinitely many times. It could be reformatted and edited—if need be—and is written in uniform characters which would be readable by anyone. Anyone, that is, who can read the language of documentation. As character typing seems more effective, I feel that it loses the universal abilities of shorthand. If this style of writing was truly subjected to sounds alone, it could, potentially, be used to document the speaking of any language in perfect detail. By reading back the sounds, one could potentially recite any tongue. This is something characters cannot represent. In the English language, characters do not fully reconstruct sounds. Rather, they can stand in place of ideas or meanings.
With so much text-based communication, we often inject emotions and symbols (like the ever famous UNICODE SNOWMAN! ☃) 8^B <<< this is a nerd-face emoticon.
In a sense, this new form of life documentation is more natural and fluid. Formal conversations no longer require a stenographer. Anyone can pull out a smart-phone and text his/her thoughts to Twitter or Facebook or the tumbleweed rampant Google+. While we may not be recording conversations in a potentially universal medium, we are keeping an ongoing log of our lives and thoughts in the most efficient form possible.
While my grandma reminisces on writing shorthand on her steno-pad, I pull out my phone and tweet about the table conversations in 140 characters or less.
Elegance in the art resides in selecting those ≤ 140 characters.
Posted by Anonymous @ 15:34 No comments: Links to this post

Dancing is an art form, as the performance aspect is a live and kinetic display of controlled movements in visually-appealing fashions. In the same respect, one can see juggling as a work of art as well. Much like dancing, it involves coordination and bodily practice, as well as rhythm and style. One of the most brilliant displays of juggling I have seen is Viktor Kee’s stunning act in Cirque du Soleil’s performance of Dralion –>


Juggling embodies the essence of the human condition, as it involves intentional manipulation of objects. The ability to inflict life into objects comes from the innate nature of our species. We have opposable thumbs and incredible brainpower, allowing us to bend objects into our desired shapes and purposes. This has been engrained in our species. As a recreational and performance activity, juggling has many origins. The earliest forms of this activity stem from several ancient cultures around the globe. From the Romans to the Chinese, Egyptians to the Norse, Polynesians to the Aztec, the roots of juggling can be found. In all of these cultures, juggling emanated from the work of entertainers, or ‘fools.’ While their primary concentrations were on recitation of poetry, storytelling, etc, skills such as ball tossing were also commonplace for entertainment.

It is a unique artistic display, as it takes the manipulation of objects into a visually pleasing performance. Juggling follows a pattern and that repetition is not only fluid and appealing, but the nature of the art. We enjoy seeing the flying balls, circling in arcs back to the thrower’s hands. The three-ball-cascade, the most basic and elemental of tosses, is a fluid and infinite loop that can be mesmerizing to viewers. Each ball completes the same cycle and receives an equal amount of attention from the juggler. It is a brilliant cycle of coordination, even at its most basic level. When advanced, the performance can become truly breathtaking.

The varieties of juggling—changing the patterns of tosses, increasing the number of objects, replacing the objects themselves—are ultimately limitless, allowing for a continuing improvement and evolution of the activity. For instance, contact juggling, which involves moving a single ball around the hands and arms as a form of optical illusion, has grown in popularity over the years. Other variants include the more treacherous acts of juggling chainsaws or flames. Unicycles and stilts can be incorporated, and soon the varieties of the performance reach new levels. Yet they all maintain the same fluid and mesmerizing cycles that captivate us. All the varieties can be traced to their entertaining origins around the globe. All of them are forms of art.

Posted by Anonymous @ 15:10 No comments: Links to this post

Reshaping the Shackles on Banned Books

Nigel Poor, a visiting artist residing at Alice Lloyd Hall, has inspired a great movement in the arts over the past week. She has introduced a new form of social-redemption in literature, which reworks censored material into a more liberated state. This banned book project has been incorporated into the community of Alice Lloyd, allowing students to take part in reshaping novels into new pieces of art.

Whether it be torching a copy of Fahrenheit 451 or separating black-and-white pages from The Adventures of Huckleberry Finn, the process of recreating these books more powerfully captivates the original spirit of the work itself. Especially now in the information age, when physical books often go extinct for the more suitable online medium, the power of paper in a work is an attempt at reviving the spirit of physicality available in books. There is something about bookstores and libraries that is intrinsically pleasing in real life, as opposed to the digital medium. One can argue the aesthetic value of actually seeing the sheer volume of information available in a bound piece. When this body, this container for the substance within, is minimized to the visually unsubstantial work on a computer screen or digital reader, something is lost within the book. It is like a person being transformed into digital material, like on Facebook or Twitter or any other form of social media. The ideas—the spirit—of the person remains, as they can write their mind and demonstrate the thoughts swimming within via pictures and art and music and all these great things, but the container, the body, is not transferred. Therefore, it is not the same. We crave to meet people in person; which is why we still have interviews and keep restaurants and social gathering places in business. The body, our container, affects the content. Be it from body language or outward expressions of our personality—hairstyle, skin color, piercings, etc—our physical form has an effect on the thoughts within. This is what the banned book project plays upon.

The paper books themselves were not the things that were banned, it was the ideas within. However, in order to truly demonstrate the power of those ideas, text is not entirely captivating. While we can write about the struggle and ignorance of censorship and topics of controversy for hours, the physical art form is what embodies a deeper meaning, which can withdraw personal emotion and insights from the viewer and give off something the banned books were once unable to give—inspiration and revelation.

They embody the power of the written word in a new shape, and provide a growing deviant of inspiration unachievable by simply the text itself. It gives new life to these formerly shackled pieces. It frees the book.

This project is currently on display at the University of Michigan’s North Quad, Room 2435, through December 8, 2012. In the spirit of this post, I encourage you to view them in real life. The pictures do not give them justice.

Posted by Anonymous @ 20:52 No comments: Links to this post

November 1st. Day one of writing hell. Today marks the beginning of National Novel Writing Month. It is the genesis of a 50,000 word journey. A trek I am setting out on. As a result, I may not be tending to my blog as often as normal (which means I could have a grand total of zero posts in the month of November). However, stay posted, for I will be revealing snippets and possibly my whole novel (if I have the diligence to complete it) on this blog. I cannot promise it will worth reading. It may not be pretty. In fact, I can guarantee it will be quite ugly, but I can only hope that it will be complete. So let me begin at 0, and remind myself that a journey of one thousand miles begins with a single step. A single page. One word. One keystroke. Let's do this.
Posted by Anonymous @ 11:30 No comments: Links to this post